A few thoughts that go out from India in the monsoon season. Well, the monsoon season is about to end and it has been an encouraging time as enough rainfall was received. It means India will have enough grain to feed its people and enough money in people’s pockets. India is primarily an agricultural country and as such if the farmer is happy the country is also happy.

The country has also seen the completion of Narendra Modi’s government’s hundred days. Modi made tall promises to be elected prime minister and now, naturally, people are evaluating his success/failure vis-a-vis those promises. A few things have changed. Government officers and staff who used to come to office around 10.30 a.m. are now rushing to the place of work at 9 a.m. This is a good thing and must be admired.

One of the policies announced is the Jan Dhan yojana in which poor people who don’t have bank accounts will get one. The idea is to transfer subsidies and other benefits directly to people’s banks, and, therefore, avoid the middle men. This is a good scheme from all outward appearances. But, if the accounts remain empty how will the banks administer around a billion accounts? Do they have the manpower, the resources?

The prime minister has also visited Japan and come away with investments totalling around USD 50 billion. The economic benefits of this will take time to show, however, this is a good sign of a developed nation’s interest in India. There’s a quid pro quo in this. Japan and India have a common enemy in China and this could be a case of “an enemy’s enemy is a friend.”

Terrorism, Maoism, economic disparity, these are issues the prime minister hasn’t dealt with yet. And, also communalism. The prime minister has asked for a ten year moratorium on communal violence (i.e. violence between religions and castes), but will this be possible at all to implement? Already there are rumblings of discontent which may grow into a groundswell, anytime. Afterall, Modi came to power on a communal agenda. Didn’t he? 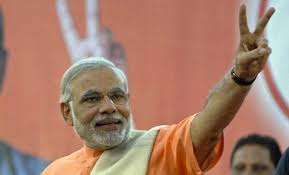 India is going through a phase which can only be described as a transition period. Politically, the uncertainty has been heightened by the victory of Aam Admi Party (AAP), which had emerged on the political scene only a year ago. The hitherto largest parties – The Congress and the Bharatiya Janata Party (BJP) – have been humbled at the elections to the New Delhi state legislature. The dark horse, the AAP in this case, won 28 seats which doesn’t ensure that it can form a government. Most of the seats were wrestled from the Congress which could only manage 8 seats. However, it can join with another party to form a government. The dilemma is which one to join: collaboration with the BJP would give it the stamp of being a communal party, and going over to the Congress camp would mean it is compromising on its ideals. The idealistic platform on which AAP was set up was that the Congress party is corrupt and therefore it should be dislodged from power.

It is at once a sensitive and grave situation which will also determine the fate of all parties at the national elections to be held four months from now. The ruling Congress party has many agendas to deal with: price rise, poverty, welfare project implementation. Its food security bill is one that would ensure food for the poor but would involve a huge expenditure at a time when the current account deficit is huge. Inflation is driving up prices of items of everyday use such as onions, potatoes and vegetables. People are grumbling and voicing their displeasure across the country.  They are waiting to be decisive and show their choice of leadership in the national election. This election will be a game changer for all parties concerned: the UPA (the coalition led by Congress) and the NDA (the coalition led by the BJP). The emergence of a third front which will probably constitute the regional parties is being discussed in earnest, but, so far, nothing substantial has emerged out of it.

Thus, the only option for the Indian citizen is to wait and watch.

A few days ago we wrote about the government’s new economic policy. It came as good news to us, waiting for something to boost the economy and recharge the process of development. However, what we saw in the newspaper today is quite disappointing, no, quite depressing. What is depressing is this:

Around Rs 200,000 million has gone missing from the government’s allocation for irrigation. Now let us explain. Most of India face shortage of water and a drought is usual during the summer months leading to famines and extreme misery for farmers. The irrigation department was supposed to build dams and canals for the above amount so that farmers can cultivate throughout the year. It has been found now that Rs 200,000 million was given but no dams and canals were built. Then where did the money go? Did it disappear like a stream in the desert? Obviously it went into the pockets of contractors and bureaucrats. It’s only now it has been found out that a certain minister had approved several projects which have not yet been completed. What is more hurting is that some projects have been given additional funds without showing the required progress in construction.

So that’s the depressing news. Awful isn’t it? How can we be upbeat when such incidents are brought to our attention? The warning signs had appeared long ago when an official of the irrigation department had pointed out that the minister had signed on projects without the required aapprovals. Why wasn’t any action taken at that time? Will they nail the real culprits? We can only wait and watch as the story unfolds.

I am John P.Matthew, a writer from India and I will be writing a regular column for Johntext from today. I thank Hans-Jurgen John for inviting me to be a part of Johntext.

Well, to be frank,  India is as yet a poor country where millions of its citizens live below the poverty level. Only recently the economy has improved because of the influx of funds into the business outsourcing and software development industries. Even then the country has a problem maintaining a growth rate of 8 per cent it needs to keep up with its neighbour China. This year the growth rate is much below the 8 per cent target and is lagging behind at 6. So the government has unleashed a number of reforms among which are: raising the price of diesel (which is already very high), increasing the price of cooking gas, allowing foreign direct investment in multi-brand malls and shopping chains. People here feel this will further drive up the inflation rate.

However, these reforms haven’t been accepted by all Indians. Trinamool Congress, a party supporting the coalition that rules the country withdrew its support and the country erupted into strikes and bandhs (bandh means a stopping of all work) by the leading opposition party, the Bharatiya Janata Party (BJP). The beleagured government is adamant about its resolve to go ahead with the reforms which should see a considerable improvement in growth rate, almost up to 8 per cent.

Now what remains to be seen is what the corruption-tainted government will do to pacify the opposition parties. Already there is talk of early elections by the opposition since a poll now will favour them. The ruling party of Manmohan Singh is reeling and a blow could bring the government down. So all eyes are watching what this taciturn former bureaucrat would do to save the economy and, at the same time, keep the government’s allies happy.